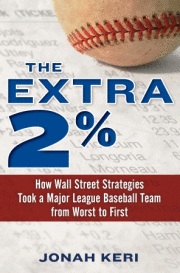 The Tampa Bay Rays are one of the least heralded success stories in sports of the past decade. In 2007, it was business as usual for the then-Devil Rays. They went 66-96, good for their ninth last place finish in ten seasons as a Major League club, and just under 1.4 million fans watched Alberto Reyes rack up 26 saves.

Since then, the Rays have won the AL East twice and made the World Series once. They’ve dethroned the league’s two richest teams and still sport a solid young core of players that make them a perennial threat in the American League. They don’t have a new stadium and still draw under 1.8 million fans per season. Yet, the Rays have become the latest small-market success story. How?

The how is the subject of Jonah Keri’s latest book. Entitled The Extra 2 %, Keri’s book explores, as the lofty subtitle says, “how Wall Street strategies took a Major League Baseball team from worst to first.” With a new ownership group in place that was willing to experiment and push the envelope, the Rays took advantage of their position at the bottom of baseball’s economic pecking order to dig for advantages. Luck played no small part in it, but the Rays have something that works, for now.

To set the stage, Keri spends the first few chapters exploring the tortured history of baseball in Tampa Bay. The sprawling metropolitan had always appealed to Major League Baseball more as a threat than as an actual landing place for a team. Whenever a successful franchise needed a new stadium, it would threaten a move to St. Petersburg. The White Sox did so in the early 1990s; the Mariners followed suit a few years later; and the San Francisco Giants were apparently this close to shacking up in the Trop.

Yet, despite the fact that St. Petersburg went so far as to build a stadium — an ugly one at that — without a tenant, Major League Baseball never graced the area with a team. Miami got its franchise first, and it took the threat of a lawsuit that would have rocked baseball from its lofty perch atop an antitrust exemption to see the Devil Rays enter the world.

When they did, it was a spectacular disaster. Vince Naimoli was the wrong man to own the team, and Chuck LaMar was the wrong general manager. The club burned draft picks by signing bad free agents. They wasted other picks by avoiding top talent in the name of “signability.” Sometimes, they landed the right guy; Carl Crawford stuck. But Jason Standridge and Dewon Brazelton are a testament to the disaster.

Keri’s narrative picks up the Extra 2 % when Stuart Sternberg, a baseball fan and Wall Street guy, buys the club from Naimoli. He brought Matthew Silverman and Andrew Friedman with him. Together, these three guys changed the franchise. They changed the way it does business; they spruced up Tropicana Field as best they could; and they began to search for the edge — the Extra 2 % — that would allow the Rays to remain competitive in the rich American League East.

Unfortunately for Keri’s book, the meat of the Extra 2 % is a proprietary one. James Click and Josh Kalk, two former Baseball Prospectus writers, are among the top figures working behind the scenes, but the Rays, who cooperated with Keri only at the end of his reporting, keep these minds away from the press. A certain part of the Extra 2 % is still a secret.

Yet, that doesn’t leave the book lacking, and Keri provides deep insights into the Rays’ process. He talks with Silverman and Friedman about their baseball arbitrage process, and while he doesn’t go inside the Rays’ draft room, he explains how the club is working to identify baseball talent on the cheap while selling high and drafting wisely. The Extra 2 % comes from the organization’s idea that they have to be that much more diligent than their competitors. The Devil Rays might have missed out on Albert Pujols in the early 2000s, but that’s a mistake the current regime will not make again.

Ultimately, the book is a great read, and I can’t recommend it enough for Yankee fans of all stripes. We might envy the Rays their recent success and no longer view them as the pushovers they once were. But that doesn’t make them an unlikeable franchise, and Keri’s book humanizes a franchise long scorned by the baseball cognoscenti.

The end of Keri’s book, on the current stadium, left me wanting the more than isn’t there yet. Tropicana Field is ugly and out of the way. It’s in a town with very high unemployment, and while the Rays have the highest TV ratings in the game, they can’t get fans to come. They also can’t force the area to fork over public funds for a new stadium.

So my question still remains: Can the Rays maintain their success? Keri says they can, but I’m less optimistic. (Perhaps, that’s my inner Yankee fan speaking.) Their payroll this year is much lower than in recent seasons, and their bullpen and lineup approach resembles something of a band aid. They will rise and fall on their arms, but as the young guns grow up, can they keep winning? The cast of The Extra 2 % came of age at a time when the Rays had the right guys making the right Number 1 draft picks. Success comes at a price, and in 2011, we’ll learn if the Rays can sustain success of it small-market wins are merely cyclical.

Editor’s Note: Jonah Keri is a good friend of mine, and his publisher supplied me with a review copy of the book. Joe and I are also mentioned by name in the Acknowledgements. Still, this review is an impartial one.

Perhaps the best news of the month is the current seven-game slide of the Tampa Bay Rays. They looked unstoppable a month ago, but now seem to be regressing to the mean. That’s not to say they’re not a good team. They certainly are. And they’d be a lot better if Carl Crawford was hitting as he has in recent years. Given current indications, though, we could see the Rays drop off a bit in the second half, much to the delight of the Yankees.

The key to Tampa Bay’s second half is their home/road discrepancy. They currently hold a 36-14 record at home, and a 19-25 mark on the road. The significant part of that is the number of games they’ve played with each: 50 at home, and just 44 on the road. So they have 31 games left at home, and 37 on the road. If they continue to play sub-.500 ball away from the Trop and can’t keep up the torrid pace at home, they could quickly fall out of the Wild Card race.

Then again, this is an instance where past performance might not be the best indicator of future results. If Tampa Bay can get their overall road record back to .500, they could negate any kind of drop-off in play at home. Still, to know that they have more road games in the second half is a bit reassuring.

Update: I’m not upset about the dissenting in this post…just wanted to note that a couple of paragraphs got cut out in the middle because I misread a quote attributed to Gomes which I originally has as Shelley’s words. So that kinda took the air out of that balloon.

PeteAbe told us this afternoon that Shelley Duncan slid into Akinori Iwamura with his right spike high. Okay, I thought. No big deal. No, you don’t want your guys taking out other guys’ knees at this time of year, but from the description, it seemed harmless. In fact, I even privately chastised Jonny Gomes for running in from right field. But then I saw this pic:

There’s a difference between sliding with your spikes high and sending your sole towards another man’s family jewels (I’ve always loved that euphemism, family jewels). So I pretty much agree with what B.J. Upton said: “Just a flat-out dirty play. Period.”

As if things couldn’t get worse, Tough Guy Gomes ran in from right field:

“I probably could have done a lot of things worse, but it is a baseball field and there’s fans and kids watching,” said Gomes. “I just had to let him know, that’s not going to fly with me on the field.”

Yeah, it’s nice to see the players fired up. But this needs to end now. It really should have ended after Heath Phillips drilled Evan Longoria. But since we’re far past that point, we need Girardi and Maddon to jointly say “enough.”

Mike is running weekly thoughts-style posts at our "RAB Thoughts" Patreon. $3 per month gets you weekly Yankees analysis. Become a Patron!

Got A Question For The Mailbag?

Email us at RABmailbag (at) gmail (dot) com. The mailbag is posted Friday mornings.